An infantry division had some 5000 horses that required 53 tons per day of hay and oats.

Besides the ability of trains to deliver very heavy loads and their capability to travel day and night without stopping, German locomotives used coal. Coal was plentiful in Germany while fuels were not.

The magnitude of this task is clear when considering the enormous logistic effort required to keep modern production plants in operation. Each large manufacturing company is roughly the size of a division. Imagine the complication for the supply chain managers if their plants move 30km (19 miles) farther ahead every day.

If the reader has ever played paint-ball, the game that uses colored balls of gel fired with special-purpose CO2 guns to simulate combat, he can make this experiment: allocate triple ammunition to one team and observe how this provides an unfair advantage.

According to Logistics Engineering Handbook (Don Taylor) even in 1991, during the Gulf War, “brute-force” logistics, that implied grave inefficiencies, were the norm.

American logisticians found out that it was almost impossible to sustain the U.S. armored forces attempting exploitation after the breakthrough achieved in St. Lo in 1944 and eventually the operation ground to a halt (Kral, 1991) P. iii.

For instance, reconverting the steel of captured Soviet tanks during Barbarossa was potentially sufficient to manufacture nearly 2 years-worth of German AFVs.

Supplies are needed by armies even in retreat. By imparting a higher tempo to their operations, the Germans placed their enemies in great difficulties. 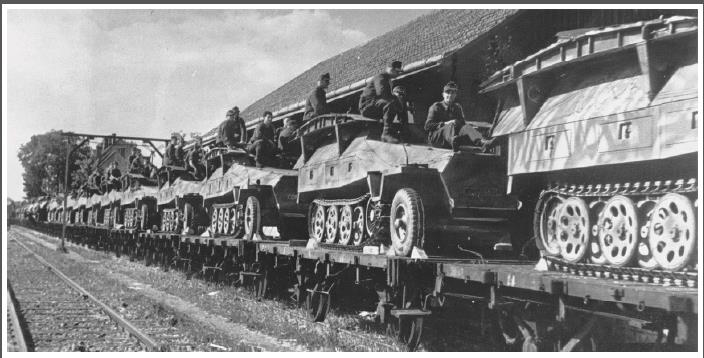 THE LOGISTICS THAT SUPPORT THE BLITZKRIEG

It was more difficult to keep a Panzer Division properly replenished, despite its lower tonnage-requirements, than an infantry division. The reason is that the former would start the day in a certain place and by the end of the day, it could be more than 30 km (19 miles) farther ahead, forcing the supply columns to deliver the same ton of goods a longer distance.

German factories shipped fuel, oil, and lubricants (a.k.a. POL), ammo, food rations, and other equipment (spare parts, medical equipment, soap, razor blades, weapon-cleaning kits, boots, etc.) to depots in the Reich’s zone of the interior where storage and readiness for delivery took place. These depots then shipped their supplies by railroad to railheads on the fighting front at the rear of the Army Groups where unloading ensued . Army supply columns of motorized vehicles then moved the stores to the divisional depots in the rear of the zone of combat. The goal was to deliver whatever the troops consumed the previous day. From the railhead to the divisional collecting points the maximum distance during Barbarossa did not exceed 200 km (125 miles) . An Opel Blitz 3.6-ton truck had a range of 400 km (250 miles), so considering that it had to deliver supplies and return and that the roads were not perfectly straight, the radius of action was roughly 150km (90 miles). This means that a 200-km delivery, required using part of the payload to carry the return-trip fuel, not to mention 12 hours total driving. Therefore, to increase efficiency and minimize the use of scarce fuel, the German logisticians selected railheads as close as possible to the zone of combat. The 200-km distance may not appear too long for the reader, accustomed perhaps, to hear that a modern logistics truck can deliver cargo from the Eastern US Coast to the Western Coast, a 4000-km distance. But these lorries get fuel en route. In Russia, no gas stations were waiting for the German supply columns, and the trucks transported the fuel for the round-trip themselves.

The German field supply organization typically delivered the supplies to the troops in 3 steps after the stores were in the railheads: (1) Army supply columns delivered the supplies from the railheads to the army dumps, parks, and collecting points. This organization, named Grosstransportraum could deliver 20,000 tons per day behind each of the army groups. For Barbarossa, each army group had a dedicated motorized regiment for this purpose . (2) The divisional organic supply companies then moved these supplies from the army dumps to the divisional collecting points. (3) Finally, the battalion supply columns picked up the stocks from the divisional collecting points and delivered them to the combat troops through battalion or company distribution points. Troops themselves would go to these points for resupply. German divisional supply was organized to permit splitting the division in 2 (usually) or more task forces (Kampfgruppen) as required.

During prolonged fighting, the commander had to maintain troops in reserve fully supplied to replace a unit in the front that had depleted its ammo, or he had to use troops to fetch the ammunition to the engaged units.

The system was flexible enough to swiftly support the advance or to avert enemy countermeasures attempting to prevent this from happening. Re-routing through friendly controlled areas, even if it necessitated a longer distance, was common to bypass a blocked road. In some cases, air-lifting was the only means to forestall a critical situation .

The winner in a battle is usually the side that achieves fire superiority , so it is essential to keep the stream of ammunition and fuel flowing smoothly. After an intense battle, ammo levels diminish very rapidly because troops, vehicles, and guns have quite limited capacity to hold stocks and an enemy counterattack with a fresh unit is usually enough to place friendly units in dire straits. Unless the friendly troops receive ammunition on time or a supplied unit takes their place, they may find necessary to retreat to avoid annihilation. This is one of the reasons many fiercely disputed locations changed hands often.

The blitzkrieg was rewarding for the tactician but a nightmare for the logistician. Logistics dictate the tempo of operations by delivering the required supply, at the needed point, when the troops require it and in the demanded quantities. The control of hundreds of tons of cargo involving thousands of parts at a time when computers did not exist and a paper and pencil system supported by telephone lines (and radio) was all that was available, denoted a daunting job . The German supply organization proved a match for the challenge, maintaining a steady flow of supplies during the battle that proved superior to its Russian counterpart during Barbarossa. The Russians found themselves losing many engagements because its supply organization was breaking down allowing the Germans to attain fire superiority. Soviet inexperience was not the only cause of this breakdown, the Luftwaffe imposed an enormous strain on the Soviet logistic system such that on certain areas and for certain periods, the Russians supply troops could only operate by night while the German system operated 24 hours a day.

Although it was not perfect, the German supply organization achieved significant accomplishments. Time and again it permitted the projection of force along the selected axis of advance providing the combat troops with the supplies needed to prevail in battle. The initial Minsk pocket in June 1941 required a 300km (200 miles) penetration in 7 days by 2 panzer armies. To place the magnitude of this feat in perspective, we can consider a supply study of American armored divisions in 1944 which explains that an American armored division that relies upon its organic supply organization is limited to a 75-km (50 miles) penetration in 5 days . 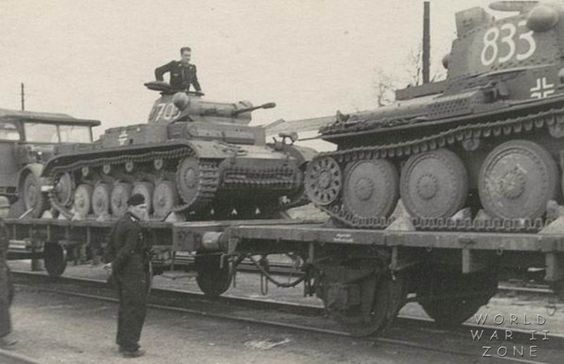 German train transporting troops. To save on fuel and wear and tear of vehicles, both combatants employed intensively trains for the redeployment of motorized troops behind the front. Most of the railroad traffic, however, consisted of supplies: ammunition, food, water, fuel, construction material, uniforms, spare parts, and thousands of other required items. Capacity was always in short supply, so the Germans placed significant efforts in transporting only what was necessary. Trains were of vital importance and consequently, the air forces of both sides made them principal targets. Picture from World War II Zone.

Supply trucks did not return empty to the original point. There was a reverse logistics system to send empty shell cases, damaged weapons, broken vehicles, and captured war materials back to Germany. This was especially important to the Germans because of their lack of substantial raw material sources and the British blockade .

German maintenance troops were also key to preserve combat effectiveness. Vehicles and weapons require frequent maintenance to keep them operational. While in the 21st century it is rare to see disabled vehicles on the road, as late as the early 1980s it was a common occurrence. In 1941, AFVs and trucks broke down often. Without maintenance troops, serviceability rates could drop dramatically in a short time. This logistical dexterity, coupled with tactical talent, meant the capacity to defeat large enemy forces rapidly . The assumption of the superiority of the Wehrmacht by the German High Command proved well-founded and it came as a very nasty shock to the Russian General Staff.

The magnitude of this superiority in 1941 was such that the Russians realized that defeat was a real possibility.

During the planning of Barbarossa, it was complicated to establish quantitatively the magnitude of this qualitative fighting superiority. The research of this operation shows without doubt that the German High Command expected to fight outnumbered. To conclude that the German forces could defeat the Soviet army, despite this numerical inferiority, it was necessary to make the judgement that the German divisions were more formidable than their Russian counterparts. The estimate of one German division as equivalent to two Soviet ones appears to be the basis of calculation by the OKH.

In 1941, the Wehrmacht was the only military force in the world capable of successfully implementing and sustaining the very-deep penetration air-land battle concept. It took the Soviets 17 months of continuous fighting against the Germans to execute their first successful deep encirclement and this occurred in winter when weather restricted air operations and against flanks defended by non-German armies. It would take them another 8 months to match the German army.

Achieving fire superiority. The situation is even (left). Black has gained fire superiority (right)
The army depots (1) supply a consistent flow of ammunition to the divisional depots (2) so initially, both sides enjoy full stocks (3). The adversaries engage in bitter battle (4), neither side obtaining a decisive advantage. German air force intervenes by bombing the enemy army depot and supply routes (5) seriously affecting the replenishment, which dwindles to a dangerously low level (6) forcing the Red Army to reduce its ammunition expenditure. The red forces have only two options now: retreat while ammunition is still available or continue the fight until it is depleted, forcing them to surrender shortly afterward.