German military though established that only the offensive brings victory and the Blitzkrieg doctrine charted a mechanism to achieve it (see Blitzkrieg chapter).
There were various forms of attacking the enemy defense line. In the enemy center, requiring a frontal attack against what was usually the most well defended enemy sector; against the wing, which was usually less well defended; against an open flank, which tended to be very affective because the bulk of the defensive weapons are not facing the flanks; against the rear in an envelopment maneuver, which was many times devastating; and bypassing completely de defenses to penetrate towards the enemy rear areas in an encirclement maneuver which usually was decisive.
Even the most powerful armies cannot muster overwhelming force along the whole front, so the Germans selected a point of maximum effort or Schwerpunkt, where they concentrated the bulk of their firepower and most of its reserves. When the enemy line was intact and the only options were frontal or wing attacks, the Germans usually launched the main attack against the wing of an enemy formation. 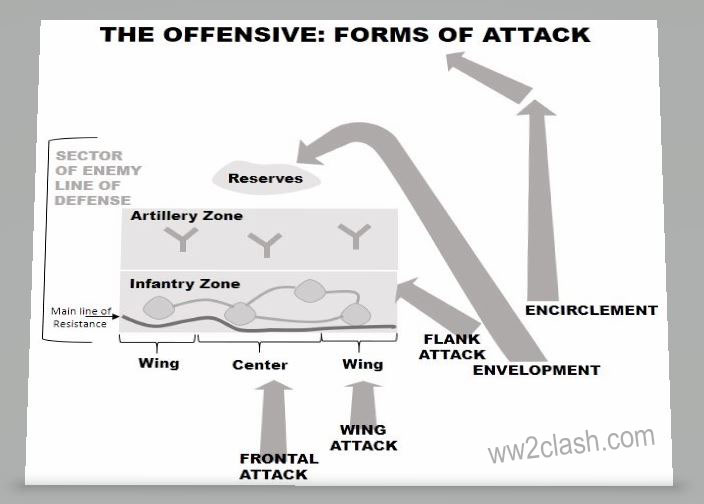 The German officers selected carefully this sector, not only operationally as part of the overall attacking plan, but also tactically.
Scouting troops reconnoitered thoroughly the possible sectors of assault to maximize chances of success. The best areas had two main characteristics: weak defenses and suitable terrain for heavy vehicles to carry out the attack and ensuing exploitation.
To avoid an early identification of the point of main effort by the enemy and to pin the enemy in place, the German troops executed other attacks along the front with weaker forces (diversionary attacks). This delayed the shifting of the adversary’s reserves as much as possible. Additionally, the Germans selected a sector for a secondary attack, not far from the point of main effort, carried out with strong forces. If the secondary attack met with unexpected success while the main attack was making slow progress, the Germans could redirect the reserves to this point. The proper deployment of reserves in jumping-off areas and a strong unified command were prerequisites for these maneuvers.

The goal of the main attack was to pierce the enemy’s defensive position overrunning the enemy artillery zone and creating a wedge in the defense system. At this point the Germans considered the initial assault successful and powerful reserves started pouring in through the gap.
These reserves attacked the enemy flanks to widen the penetration and to defeat enemy reserves trying to close the breach. With the breach broadened, the attacking commander inserted additional reserves to attack the enemy positions from the rear and roll up the defensive line. At this point the breakthrough was complete.
Lastly, the bulk of the mobile reserves drove through the recently cleared corridor through judiciously selected paths to gain open ground, pushing forward. Hereupon, exploitation begins.
The German air force contributed by gaining air superiority in the assault sector, preventing attacks by enemy strike planes which could dealt devastating blows to German reserve concentrations and movement; by using observation aircraft to identify the location of enemy artillery emplacements and by directing counter-battery fire against them. Aerial bombing in the attacked sector was not common because of the danger of striking their own troops and the relative ineffectiveness of attacking well camouflaged and dug-in enemy troops. However, if the enemy positions were easily identifiable from the air, for instance, when the adversary’s formations were in fortified positions or prepared defenses behind rivers, the Luftwaffe could provide strong support. More commonly, the German bombers would roam in the rear areas striking troop concentrations, command posts, supply columns, depots and airfields. These targets were more valuable and more vulnerable. Reconnaissance aircraft, in the meantime, identified enemy movements and location of reserves providing the German commanders with precise situational awareness.
Bombing and reconnaissance in the rear areas became intense, sometimes overwhelming as the exploitation started to gain steam. These combined arms-team isolated the enemy in the attacked sector and defeated it.

Development of the Main attack.

To achieve firepower superiority, German formations launched their main attack on a narrow front. A division would attack a sector 5 km (3 miles) wide or less. A battalion a segment of no more than 1 km (0.6 miles). In general, the sectors for attack were roughly half the width than they would be if the units were defending them.
Jumping-off areas earmarked for attack require a concentrated deployment. This contrast with the arrangement for defense which is spread over a broad area with the intention to cover effectively as much ground as possible with the minimum number of troops.

This is the reason that a military unit is either deployed to defend or to attack but cannot do both simultaneously. Local counterattacks while on defense are possible but their purpose is not break the adversary’s defense but to keep the enemy off-balance. A unit posed to attack is vulnerable if forced to defend suddenly.

Friendly observation aircraft operate behind enemy lines for this purpose: the information provided allows to deploy defensively if necessary. Lack of reconnaissance aircraft to observe enemy movements is a serious handicap because it becomes exceedingly difficult to establish direction, magnitude and timing of enemy attacks.
The start of the main attack commenced with artillery guns creating a high explosive (HE) barrage in front of the enemy position to destroy the minefields. Then, the artillery fired a combined barrage of high-explosive and smoke on both sides of the limits of the attacked sector isolating it.
In this way the attacking units had a clear visual clue of the zone of the operations while the enemy troops on adjoining sectors had difficulty observing the development of the assault.
Then, the artillery laid out a smoke barrage in front of the enemy position to allow tanks to move forward unseen to the anti-tank guns, while other howitzers and mortars shelled a high-explosive barrage over the areas of identified defended positions. Since the enemy guns were sure to respond, counterbattery fire was used to neutralize them. The artillery batteries only stopped firing when the tanks reached the rival’s artillery zone. 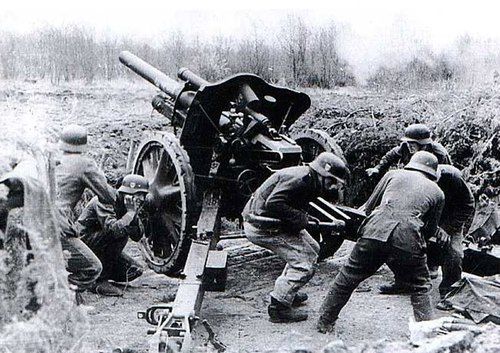 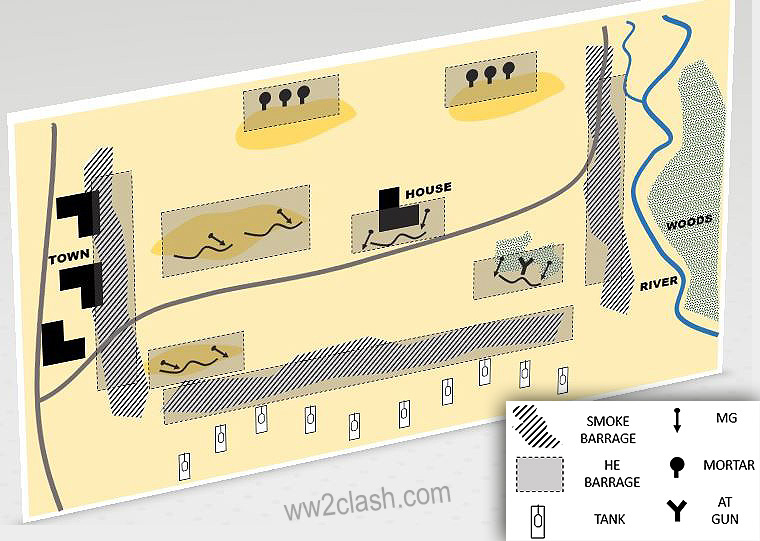 Artillery barrages in the attack

The attack typically proceeded in three waves. A tank battalion with two of its companies forward in blunt wedge advanced on a 1 km (0.6 miles) front leading the first wave.
Elements of the assault gun battalion protected the flanks of the tank battalion.
The objective of the first wave was to penetrate the infantry defenses destroying artillery and antitank positions blocking the tank’s path. Tanks advanced protecting each other by fire and movement. A squad of tanks rushed forward to a suitable commanding ground protected by fire of the second squad. Then, they reversed roles. Artillery observers also advanced with the first wave to identify targets and direct fire.
The second wave, composed of one or two companies of the second tank battalion, advanced 150 meters (160 yards) to the rear of the first wave. One or two companies of motorized infantry, supported by direct-fire assault guns accompanied the second-wave tanks. The infantry dismounted as close as possible to the targets they meant to destroy. This wave provided covering fire to the first wave and started neutralizing infantry positions.

They also destroyed the remaining antitank positions, heavy infantry support weapons (like mortars and infantry guns) and machine gun nests.
Once the tanks of the first wave reached the rear of the enemy infantry line, they pushed forward to attack and destroy the artillery emplacements in the enemy’s artillery zone.
The third wave, consisting of supporting tanks and the remainder of the armored and motorized infantry mopped up any remaining nucleus of resistance.
In the meantime, once the first wave has destroyed the artillery positions they pushed forward in open ground or they created a defensive position to serve as a springboard for exploiting reserves. 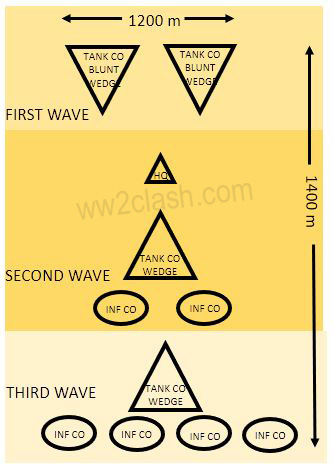 Panzer II's on the attack

The Germans modified this basic formula with variants to keep the enemy from taking appropriate measures or to take advantage of changing battle conditions. Sometimes there were only two waves or the infantry could lead the attack or accompany the first wave. When attacking heavily fortified positions, the infantry spearheaded the attack with tank support.