Rise and Fall of the Great Powers. Paul Kennedy.

World War I showed that wars between industrial powers would be long. This was the frame of reference of the leaders at the time (men plan future actions based on past events).

In physics, a closed system is one where no units enter or exit the system. In an open system, they do.

Units held in reserve at corps level or below are tactical reserves. Armies and Army groups keep operational reserves.

Industrial plants manufacture the weaponry. On the other hand, the military staff assembles the weaponry with trained troops to form combat formations, which is a military problem undoubtedly.

The field commanders directing battles at all levels, also separate a portion of their allotted troops as tactical and operational reserves. War has many uncertainties, and experience has shown that it is unwise to deploy all the available troops in front, to do battle from the start.

STRATEGIC RESERVES: THE ANSWER TO THE BLITZKRIEG

STALIN PREPARES FOR WAR
In 1918 Germany was powerful enough to defeat Tsarist Russia while simultaneously fighting a costly war with the West. The relative industrial weakness of Russia compared to Germany is one of the primary reasons for its collapse. German industrial power was almost twice as big as that of Russia, causing the latter’s army to be brittle despite a larger population, bigger army, and better raw material base. Starting in the late 1920s, Stalin strived to correct this strategic weakness with an aggressive industrialization plan. He was very successful in significantly closing the gap the USSR had with Germany. The next table shows that one year before the start of the First World War, the German Industrial Potential was 80% greater than Russia’s. But by 1938, one year before the Second World War, the German advantage had shrunk to 40% even though a German economic miracle was taking place. Russian industrial potential doubled in just one decade (from 1928 to 1938 ). Berlin would feel the impact of this Soviet grand strategic triumph 3 years later.

The Soviets did much more than enlarge their production, they integrated this increased industrial capability into a strategic approach for waging a total war that proved more advanced than Germany’s. The Russians saw that the decisive factor to win a protracted war was to generate enough strategic reserves to throw them to battle at an opportune time: the battles wear the enemy down. Once the enemy strength dissipates, the foe is vulnerable. This is the time to unleash the strategic reserves and knock him out.

The creation and use of those strategic reserves are the factors that underpin the eventual Soviet smashing victory and explain the crushing of Germany despite the operational superiority of the Blitzkrieg and the tactical excellence of the Wehrmacht.
In 1941, this was enough to check the onslaught and keep the USSR in the fight, dislocating completely Hitler’s strategy.

CREATION AND USE OF STRATEGIC RESERVES: THE ANSWER TO THE BLITZKRIEG

A Battle is a relatively short-termed fighting engagement that resembles a closed system . The forces that each side arrays for combat do not change substantially during the battle. This force arrangement receives the name of Order of Battle (OB). It consists of all military formations available to the field commanders to fight the encounter, including troops not meant to engage immediately, called tactical or operational reserves .

During a battle, losses are mostly irreplaceable, and the strength of the OB is continually diminishing, like a chess-match. The clashes in Poland, France, Norway, and the Balkans were all battles.

A Campaign is a series of battles fought over longer periods, where combat units continually disappear and new ones emerge. It is an open system: each side forms new combat units, introduces new weapon systems and replaces losses. The OB changes with time and eventually the forces that participate in the whole campaign are as numerous or more than the original forces used. The aerial combats over Britain and the air-land war in the USSR were campaigns.

Historians usually have information about the initial order-of-battle and the deployment of these forces, so their perspective reflects the available information. Therefore, the maneuvers, losses and conquered territory become their main elements to assess the outcome of the war.

Under this optic, the destruction of the enemy’s forces in the field of battle is usually the main indicator of success. The conquered territory is another evidence of accomplishment. Limiting friendly forces losses is the third gauge. Therefore, causing high enemy losses and conquering large expanses of land with low friendly losses is the way to win a war classically. This is true for a battle.

In a campaign, these factors also play a role, of course, but they are not decisive in themselves. If one combatant can generate large strategic reserves through its military training schools and defense-industrial complex, losses are replaceable. If it has enough space to retreat, the lost territory is not decisive if its productive capacity can be replaced. If the adversary’s losses are inferior to own losses, this is a cause of concern, but it is only highly undesirable if the enemy’s strength is not appreciable dented.

In a military campaign, the battles are only a mechanism to compare and reduce strength. Winning or losing specific battles is secondary.

Losses reduce strength while production increases it. The side that is getting stronger is winning, even if it is losing the battles. The overriding measure of success is the strength ratio (comparison of total forces of both sides) over time. The level of strategic reserves is an appropriate secondary indicator that demonstrates that an army is getting stronger. After sufficient time, the difference in strength may become overwhelming and the stronger side obtains the capability of translating this strength differential in a decisive field-of-battle advantage that will propel it to victory. 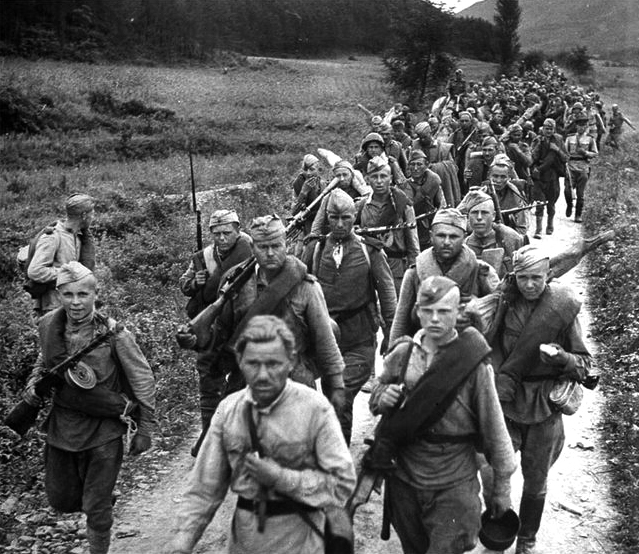 Soviet reserves marching to the front

The creation of strategic reserves is mainly an industrial problem . Using them is a military problem.

Strategic reserves are military units kept behind the front and not assigned to the field commanders in the combat zone. The Supreme Military Command keeps them under his direct control to use them for three purposes: everything else being equal, the fighting capacity of a unit depends substantially on its numerical strength and a full complement of weapons. When intact, the unit has offensive and defensive capabilities. Casualties reduce the unit’s fighting potential. If the casualties cross a certain threshold, the unit loses all its offensive ability (the military say that the offensive capability was “spent”) although it can still defend vigorously. After further heavy losses, another threshold is crossed, where the unit loses its defensive ability, forcing commanders to remove it from the front. This depleted unit can still carry out light-duty (i.e. defending positions behind the front).

The first use of Strategic reserves is the replacement of casualties of fighting units to keep them at the desired threshold level. By doing so, the High Command can extend a battle if on the defense or keep the momentum of an offensive.

Second, instead of piecemeal deployment, the Supreme Command can employ them in larger chunks, assigning them to field commanders for defensive purposes, either by reducing the impact of defeat and plugging holes in the broken front or if worse came to worst, establishing a new defensive line in the rear, to halt the enemy.

Finally, and more decisively, they can amass a powerful concentration of forces to launch major counterstrokes or counteroffensives and force the enemy on the defensive, thus gaining the strategic initiative or if already on the offense, to seize total victory .

Thus, at the outset, the Supreme Military Command must divide its available forces into two main groups: those that are part of the OB to fight the battle, and those that are in the rear for use as strategic reserves. Setting up this ratio is a critical strategic decision.

The next decision for the High Command is how and even more important when the reserves will engage. This is as important as the control of the battle itself .

The most propitious time is when the size of the own reserves is adequate, the enemy has already spent his, the casualty-tattered foe is frail and when he is not expecting them. These four conditions open a window of opportunity to deliver a knockout blow and gain a strategic victory.

Several of these knockout strikes may be necessary to completely extinguish all the capacity of a resilient enemy to wage war.

Strategic reserves afford great operational flexibility and the Supreme Command needs to keep a close watch on their rate of generation. This is a complex problem where four areas participate: the research and development centers, the military factories, the raw material hubs and the military training schools . 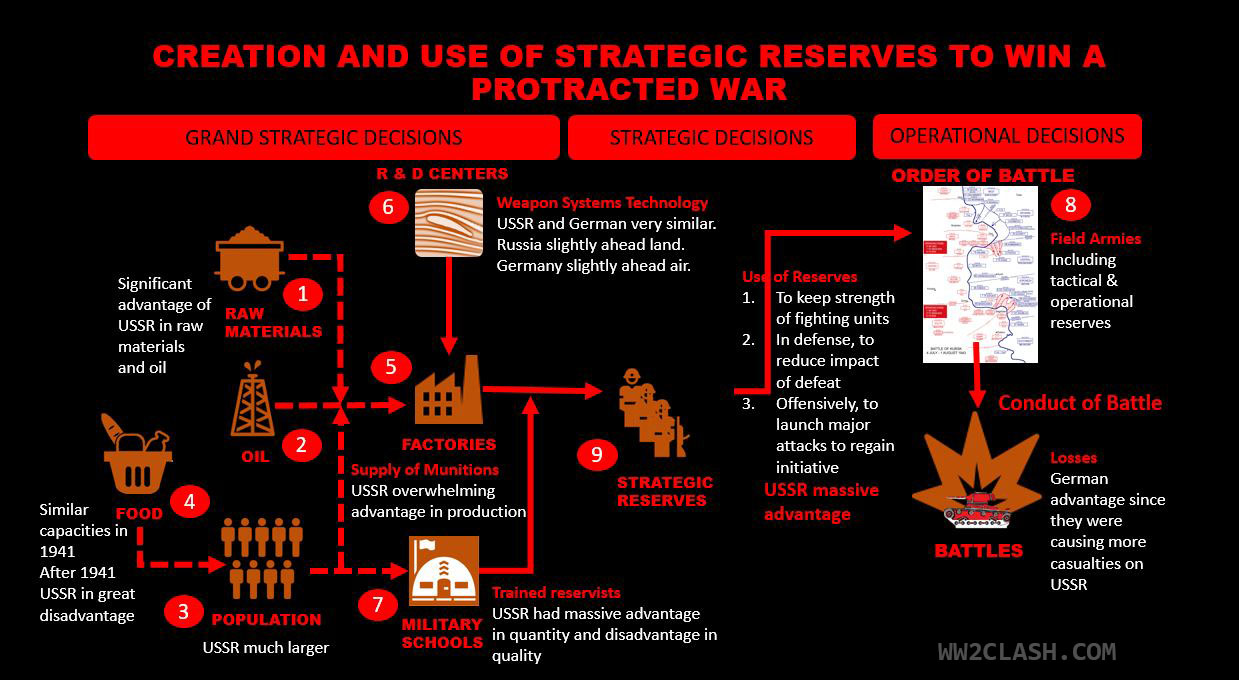 Raw materials (1) and oil (2) were two of the fundamental underpinnings that permit the operation of the munition industry. The other two were the population (3) to run everything and food (4) to keep the population alive. These inputs flowed to factories (5) to turn out weapons, designed by the R&D centers (6). Oil was used to generate electricity, transport goods, and provide mobility to the armies. Germans used coal as much as possible as a substitute.

Both Countries raised armies with the manufactured weapons and trained reservists coming from military schools (7). The Supreme military authority then allocated some to fight (8) and some as reserves (9). The scarcity of many raw materials and oil was a strategic hindrance the Germans faced. On the eve of Barbarossa, however, this was not a problem because of their control over Europe and imports from the USSR, which allowed the temporarily plentiful supply of both.

Initially, food was sufficient for both antagonists, but the loss of their best lands would become a nightmare for the Soviets. R&D centers originated comparable designs; no adversary attained any decisive advantage. However, the better mobilization of the munition industry enabled the Soviets to garner a decisive lead to first stop and latter defeat the Germans, because, coupled with the larger population, it permitted the creation of large reserves that grew faster and overwhelmed their foes, despite the latter’s better kill ratio, achieved thanks to better training and methods.

The Eastern Front War was not just a sequence of big costly battles. This perspective is not appropriate to understand the conflict and is conducive to wrong conclusions. The use of this false criterion hides critical elements that therefore receive scant attention.

The creation and employment of reserves was the main strategic advantage that the Soviet State possessed to defeat the Wehrmacht.

The Soviets planned with time, reacted quickly to changing conditions and accepted immense sacrifices to build those reserves. The Germans believed that their current strength was sufficient, and it was not necessary to mobilize for total war. They could have done much more. By not doing so, they squandered the advantages that an industrialized nation possesses over an agricultural one.

Once we realize that the USSR had enough space to retreat, equivalent technological level, a large pool of trained reservists, large stocks of munitions and that she demonstrated much better aptitude to mobilize its industrial capacity to generate additional forces, the pragmatic mind will find the outcome unsurprising, even if he does not delve profoundly in the specifics of the battles. Russia could accept a loss of all her Army several times over and still win. Major mistakes were survivable. The German mobilization sluggishness backfired and instead of using her industrial might at full capacity they accepted a force structure with less depth and therefore, brittle. Under these self-imposed conditions, they could afford very few mistakes to have any chance of winning .