And sovereignty in times of peace.

Bauxite, to produce aluminum, is fourth in line, but there are many others (rubber, leather, sulfur, etc.)

The route was not available year-round, however. During December to April, ice blocked the port and the shipments were re-routed to the Narvik port in Norway. Ships navigating close to the coast of Norway could evade most of the time the attention of the Royal Navy and RAF. See figure 32.

The Bread of Affliction. William Moskoff. P.2-4 Also, The Taste of War: World War II and the Battle for Food. Collingham, Lizzie P. 317. 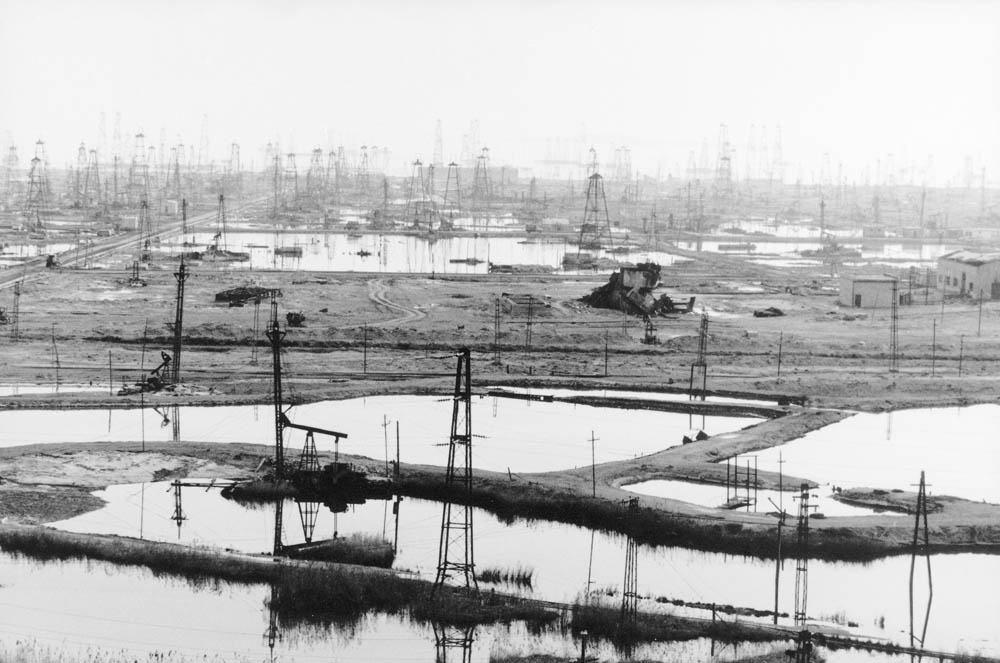 Without raw materials, factories shut down. Without food, people starve. Any major power with aspirations to win a major war had three essential conditions to fulfill: it required enough lands to grow its food; it had to control the raw materials bases that supplied the inputs to its industry, and it had to dominate the routes used to move these resources where needed.

Losing control of any of them meant certain surrender . The defeat may not be immediate since safety stocks give some latitude, but once the warehouses are empty the writing is on the wall.

Sustaining the modern war effort requires access to multiple raw materials. A German Panzer III tank used 39.000 kg of steel, 1.4 kg of tin, 50.1 kg of copper, 90.4 kg of aluminum, 71.1 kg of lead, 49.1 kg of zinc and 125 kg of rubber for its manufacture . Steel, in turn, is an alloy made of iron with smaller quantities of carbon, nickel, chromium, manganese, and molybdenum. These raw materials must all be available if a tank is to roll out of the assembly lines. 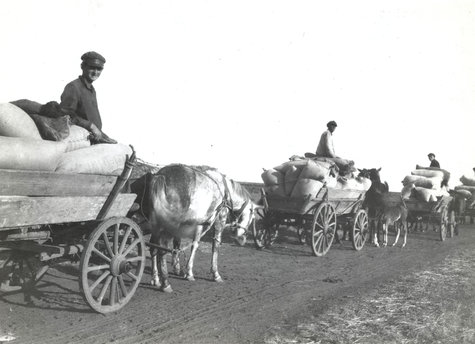 Other than the food, there are two other key strategic raw materials that countries waging war need in enormous quantities: oil and iron ore . The first enables the production of fuels and lubricants without which air and land armies cannot move. The second is the major ingredient in the manufacture of steel. Its absence prevents the manufacture of tanks, artillery, small arms, ships, submarines, ordnance, vehicles, and many other essential categories that equip an army.

Germany’s raw material situation was much more precarious than that of its main enemies. Germany had an abundance of coal and was self-sufficient in foodstuffs, but it lacked every other strategic raw material in quantity, forcing Berlin to seek sources abroad. Because Germany had coal in relative abundance, the Germans used it as much as possible to reduce dependence on liquid fuels. They were quite successful. For an economy, as large as that of Great Britain and larger than the USSR , the usage of oil was comparatively modest. Germany’s oil consumption in 1938 was 6.2 million metric tons as compared with 10.6 million metric tons in Great Britain, 25.6 million metric tons in the USSR and 140 million metric tons in the US . Coal is not convenient for all uses though. Motor vehicles and aircraft among others, require liquid fuels. German scientists developed a process to produce synthetic oil from coal by hydrogenation and this became the main source of oil for Germany.

Despite these successes, Germany did not attain self-sufficiency and remained reliant on oil acquired from abroad. Before the war, Germany purchased most of its imported oil from Mexico, but British blockade made overseas trade impossible.

By 1940 oil imports, coming mostly from the Ploesti oil refineries near Bucharest, were as much as 35% of total consumption, making them indispensable for Germany’s war effort. The extremely exposed location of these refineries to attack by the Red Army only complicated matters for Berlin. In 1939 the distance from the Soviet Union to the refineries was only 350 km (220 miles) , within range of the VVS bombers. After Stalin’s aggression to Romania in June 1940, the distance decreased by 150 km (95 miles) greatly exposing the refineries to air attack or land invasion. The loss of Ploesti implied the inability to supply fuel to the Luftwaffe and thus permanent loss of air superiority. It also meant the inability to execute large scale mobile offensives and hampered drastically the German industry because of its negative effect on transportation. Quite bluntly it signified an inexorable march to total defeat.

The only alternative oil sources available for the Germans were in the Soviet Union and the Middle East fields controlled by Great Britain.

When the war started in September 1939, Germany was heavily dependent on iron ore imports for the manufacture of steel.

The most important fields in Europe were the deposits in Lorraine (France), Lapland (Sweden), Krivoi Rog (Ukraine), and the mines in eastern England.

Germany was only able to produce about a third of its needs, so its vulnerability in this regard was even more pronounced than in the case of oil. About 27% of the iron ore required by the German industry came from the Kiruna and Malmberget mines in Northern Sweden, close to the Finnish border. The Scandinavians transported the ore by road to the nearby Swedish port of Lulea in the Gulf of Bothnia and then shipped it to German ports in the Baltic. This route was impervious from British blockade and quite advantageous as a result .

The importance of the Swedish magnetic deposits reached critical proportions because Germany imported 15% of its ore needs from France and another 3% from Spain, and these imports stopped with the onset of war.

Iron ore situation in Germany in 1938

Without iron ore, the manufacture of steel becomes impossible and without steel armament production ceases altogether. Coupled with the loss of imports from France and Spain, the loss of the Scandinavian raw material would be catastrophic for Germany who would be unable to replace any equipment losses, not to mention the impossibility to raise new air, naval and land military formations. Once again, the loss of this supply base meant German defeat, thus the invasion of Finland and the Baltic States in 1939 by Stalin caused major consternation. From the newly acquired bases in those countries, naval and air Soviet forces could block the naval traffic preventing shipments from reaching Germany (see next figure).

Objectively, Germany could not see these actions other than as aggression from the Soviet Union. Stalin had prepared the field for the future choking of German’s economy. 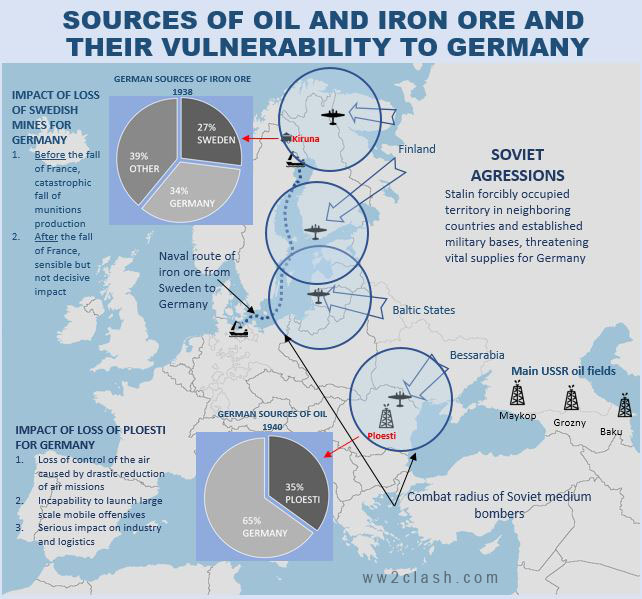 Things changed after Germany defeated France. In 1938 France produced 33.137 million metric tons of iron ore from the large “Minette” ore fields in Lorraine (for the most part) while her consumption was only 56% of production . The capture of these fields made Germany largely self-sufficient. However, Germany continued importing the Swedish ore because their iron content was 64% while French and German ores were only 33% pure, making steel fabrication more efficient.

The communist regime was greatly successful in the exploitation of minerals, particularly compared with the previous war. The large mining centers that the Soviets developed during the inter-war years guaranteed complete self-reliance. Their location was all over the Soviet Union, with some located in western Russia .

In 1940 The USSR produced 31 million metric tons of oil and had a consumption of 25.8 million metric tons being completely self-sufficient. This oil came from three oilfields in the Caucasus region: Baku, the largest by far, that produced 77%, Grozny with a 15% share, and Maykop the smallest, producing 8% . Advantageously, the location of those centers was quite far from the border. Baku was 2.400 km (1.500 miles) from the German frontier. None of these centers fell under German occupation in 1941.

With 20 million square kilometers (7.7 million square miles), the size of a continent, the Soviet Union had enough land with the appropriate climate to cultivate food.

Despite the calamitous reduction of grains and other foodstuffs after the collectivization of 1929, by 1940 the production levels of grains, sugar beets, sunflower seeds, pigs, and potatoes had increased again to pre-collectivization levels or better. The other three major staples, vegetables, sheep and cattle did not fare well and were substantially lower .

However, Ukraine produced most of these foodstuffs, notably 84% of sugar beets, 38% of grain and 60% of pigs , and this region was near the frontier. Losing this key region would place the Soviet Union facing one of the most difficult problems of the war: feeding its army and the civilian population.

The reason is that despite the extensive lands the USSR possessed, its territory was suitable for food-growing only along with a relatively narrow band of latitudes, where the climate is appropriate. The areas marked in red and pink (in the following figure) produced most of the calories for human consumption. Above that area, agriculture was minimal. The loss of Ukraine turned out to be one of the most vexing problems the Soviets faced and just barely solved . 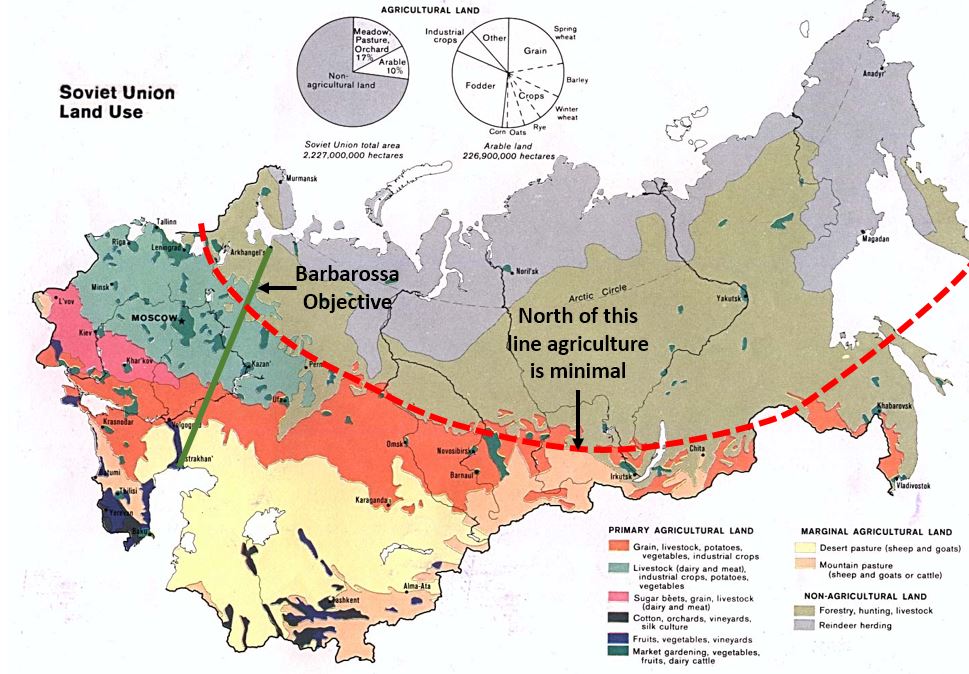 Use of Agricultural Land in the USSR. Crops that generate most calories appear in red and pink. Large areas of the Soviet Union were unsuitable for agriculture because of a harsh climate, particularly in the northern latitudes . www.mappery.com/map-of/Soviet-Union-Land-Use-Map